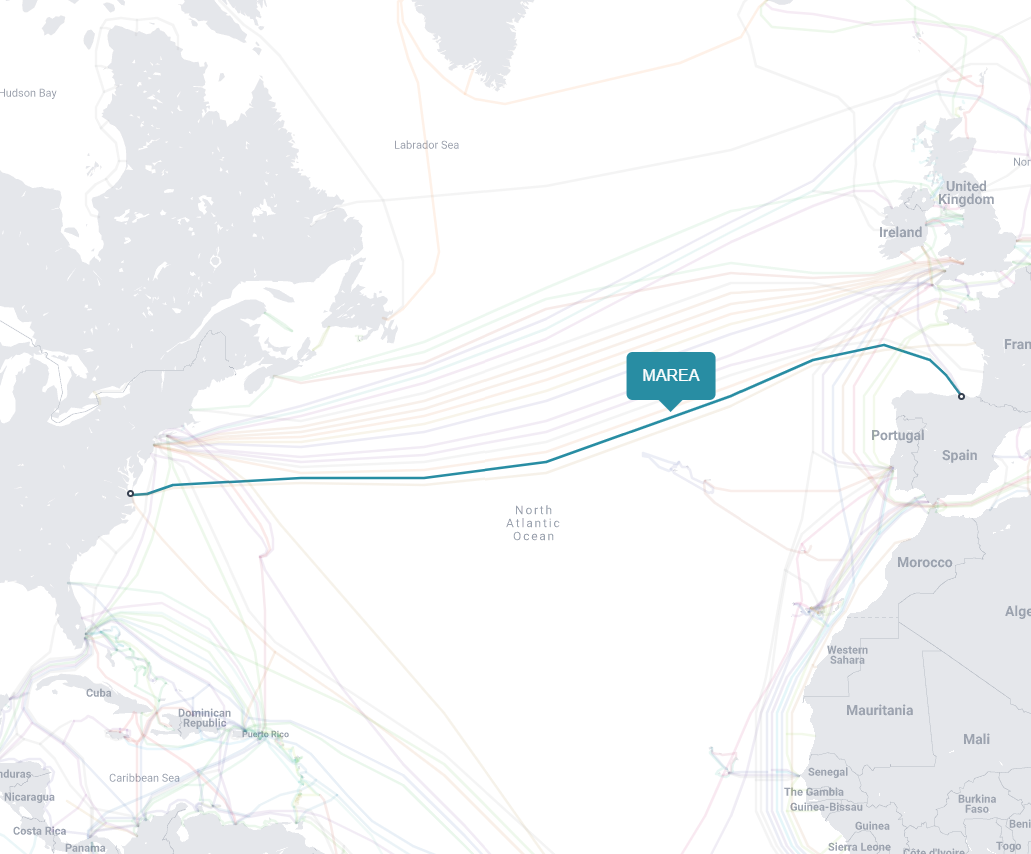 Marea is the name of a submarine cable connecting Bilbao (Spain) and Virginia Beach (USA) completed by 2017, on work by early 2018. The 4000-mile infrastructure is the cable with a higher capacity. Its designed capacity is of 160 Terabits (Tbps) of information per second, but a recent experiment managed to raise it to 208 Tbps. Is like streaming 71 Million HD videos simultaneously (Ong, 2017). For now, the cable transmits below the 10Tbps, but its capacity suggests that it is expected to last and to cope with a significant growth of traffic over the next decade. This technology is owned by a tripartite consortium formed by Facebook, Microsoft, -content providers-, and Telxius part of the now privatized but former Spanish public Telefonica Group. This alliance epitomizes a trend: two flourishing big tech corporations ally with a former public company still in charge of land-based communication networks. The two content providers play at both ends: at the data storage end owning cloud software and centers around the world, and at the user-end as software interfaces including operating systems, client software or social media platforms. Content providers are not the main investors in the cable development, yet: traditional carriers still play fundamental roles; and such is the case of Telefonica’s Telxius, a corporation built within the machinery of the national Spanish state, later privatized. Telefonica is key in the development of cable and streaming Television in Spain and Latin America, and owns, today, a fair number of stocks in the Spanish speaking audiovisual markets. This paradigmatic alliance between the actors of diverse nature represents a certain transformative geography of the internet. This paper explores mixed property consortia and discusses their implications in internet’s transformation in three ways: 1) Highlighting the implications of such alliance and its invisible wiring for the social understandings of “internet”. Ubiquitous computing “weaving itself into the fabric of everyday life until it is indistinguishable from it (Weiser, 1991:78)” (Dourish and Bell, 2011: 22) rendering the infrastructures that make it possible unnoticeable. 2) Exploring the role of these alliances in the overall transformation shape internet today in a communications system simultaneously global and fragmented, deregulated and moderated by global players that challenge a state-based world order. 3) Finally, the discussion pays attention to the territorial effects of such growth, drawing a geography of ownership embodying negotiations, struggles, colliding interests, and alliances that map global geopolitics. This paper on the ownership of the internet infrastructures adds to the available literature on the spatial inequalities reproduced through the unevenly distributed infrastructures of internet; and helps understanding the context within which the internet and digital cultures transform and thrive.